After news posts roll off the main news page, they end up here. At SuperJer.com we have news going back to, like, the 90s! 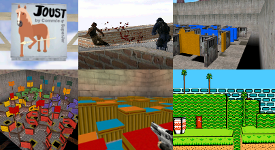 Make way for six (6) newly released Funmaps for CS 1.6.. These maps were lovingly crafted at LANs over the last several years.

If you only try out one, may I suggest the crowd favorite, joust8?

Unfortunately, this intro video is all that remains of McDiddy's 3. It has been recovered after years of floating alone in the darkest depths of the Internets. 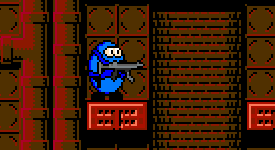 And I am making a McDiddy's game now. You can follow the progress 'round about down 'round here on the forum.

New, wholesome, delicately flaky music by SuperJer. Give your innocent, unsuspecting ears a taste of Widowmaker, the newest hopeless apendage to the SuperJer body of music.

New site design launched. On most pages. Brought back the Mao videos on the videos.

Next I will be releasing (at least) 2 new CS maps, some music, and a surprise!

New Songs: Move the Stone, Mind of the Monster, and The Laz

Lots of music been coming out of SuperJer's one man band, SuperJer, lately. Sometimes music comes from a dream, sometimes you just think it up in the shower, sometimes it comes from a mission. Music made of airplanes would be nice.

So you get groovin' with dem funky rhythms down by the music page, you soulless nincompoop.

SuperJer.com -- in association with Pole Socking International -- has recently deployed a jointly-developed artificial intelligence for content generation. Already, over 5% of the Internet has started using SJ/PSI-AI as a source of instant, original web content.

If you'd like to test the SJ/PSI-AI system yourself, now, try the PSI Headline Generator test script free! (Additional charges may apply.)

This New Year, resolve to Find the Hole!

There was nothing to play at the LAN party, so SuperJer made a new Half-Life Deathmatch map. The goal of the map is to find a way to hop, squirm, and dash between the colorful walls coming at you. With multiple players, your only weapon is yourself. Try to trap or squish your friends against the oncoming walls! It's a blast!

Happy Merry Christma-Hanuh-Kwanza!! Look at you!! You get de_substation this year!! You must have been a good boy and/or girl!!

Find out all about it and download it at the other end of this link.

The number of comic strips by SuperJer on the Internets has just skyrocketted from 0 to 1!

Go bask in the frothy, satisfying glow of SuperJer.Comic now! Every strip is made with genuine tree pulp and sharpie ink, even the one in this update picture. 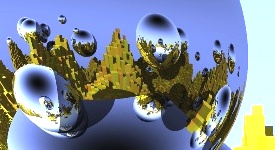 Over the weekend I was thinking about 3D graphics and ray-tracing and lighting and effects and fun stuff like that. Well then my head-gears started turning and churning (or whatever they do) and I wrote this neat new program called PixelMachine!

Check out the full PixelMachine article for a visual log of the progress, and even the source code! 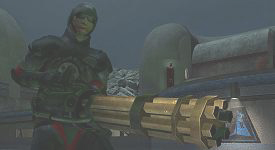 After much ado and a metric crapton of bitching, the devs over at Fortress-Forever have deigned to release an update for their Team Fortress mod. It includes a video and answeres a lot of questions as to just how certain things will be implemented. We get to see the spy sabotage, as well as 100 other goodies, and we learn just exactly what the Sentry Gun has in it's pockets. So visit Fortress-Forever.com like a good little puppet and CONSUME.

Thanks to h2o_SilentCid you'll now have delicious, lime flavored radar next time you visit de_contra in CS: Source!

Note: The map has not changed. This update is optional.

Today is a very special unholiday! It only comes once a century... it's Beastday! Be sure to celebrate with some especially innocent sacrificial lambs and don't go too easy on the mint jelly!

666 is the well-known Number of the Beast, but what about these?

McDiddy's THREE (3) has just been released!

Holy crap! It's here! It's McDiddy's! But more three-ish! Go watch it now!

New CS 1.6 map, de_verso released! It's been sitting on my hard drive gathering bit-dust since August 2005. And just now I was like, hey I should put that map on my site!

It's based on de_contra but rebuilt from the ground up. I tried to fix everything you all hated about de_contra. Make sure to let me know how much you hate it anyway in the Forums! 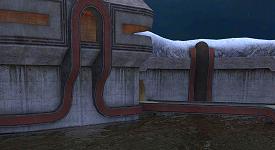 I've been pimping Superjercom now and again over on the forums at fortress-forever.com, so I thought that it was just about time to pimp fortress-forever.com right back at the Superjer crowd. If you've never played TFC, then you're a sad sorry lump of waste, but if you have then you should be ecstatic over this. The mod seeks to update the original game to the new engine and graphics, as well as tweaking the game balance to be more enjoyable for Pub players and Clanners alike. There's no release date yet (because it's being created by a very secretive cabal) but the game looks to be 100% quality. Check 'er out.

Current and future McDiddy's stuff will be located at the new Official McDiddy's Site, McDiddys.com. Previously untold information about both cartoons is available on the sparkly new site, so go check it out! 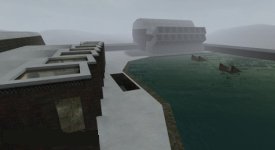 Source map awp_snowsk337 by local protein strip Nezumi is still available for download. All Source-ified and reflective, the map now features innovative 'WTF, Am I a sk337 or a shooter' gameplay. Also good graphics. Check it out and play it as much and as often as time and your own personal obligations will allow. We depend on it.

I have recently come across this juicy little bit of information. This is what it looks like when a squid gets scared and squirts ink to evade it's predators.

WARNING:Local superjercom personalities JMD and Mr. Ribbon have figured out how to post news. Analysts predict major economic troubles and severe penalties ahead. Please stand by.

McDiddy's 2 edited. Based on viewer feedback I modified a few things to remove some boring parts and added a bit more action. Enjoy!

New CS map de_contra released and to be used in CAL CS preseason. Enjoy it at the destination of this link.

New, free, 8-bit sounding music! Listen to "Irrational Chiptune" by SuperJer. If you have Modplug Tracker/Player then download the IT, elsewise get the MP3:
.it version (5KB)
.mp3 version (1.7MB)
.gif sheet music (370KB)

de_salt2 released! This is an improved version of de_salt with some important changes requested by the people. Click here!

Get Learned tutorial updated. It's much, much better now.

Want to make Counter-Strike maps of your own? Get Learned Now!

h_greenNew Soviet Union mp3! It's called "Decoy Is Hot!" So head on over to the Soviet Union Section, now! You rogue rapscallions!

Green Bean Jell-O® recipe added. Get to the Recipe Section.

Splatter Mario game now available for download. I stopped work on this game more than 1 year ago but just now decided to release it. Go check it out now!

Soviet Union is back, baby! Two all new, mildly upsetting songs for your listening pleasure! Check 'em out now!